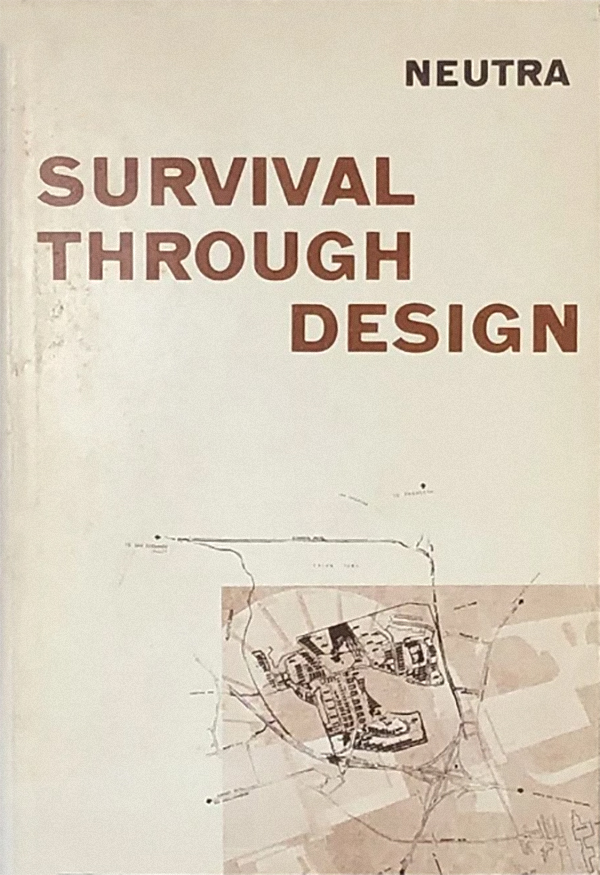 Nature has too long been outraged by design of nose rings, corsets, and foul-aired subways. Perhaps our mass-fabricators of today have shown themselves particularly out of touch with nature. But ever since Sodom and Gomorrah, organic normalcy has been raped again and again by man, that super-animal still struggling for its own balance. There have been warners, prophets, great floods, and new beginnings.
What we here may briefly call nature comprises all the requirements and characteristics of live organisms. This entire world of organic phenomena is, in the escapades of our still obvious immaturity, often treated against ‘the natural grain’ and contrary to the ‘supreme plan’—that of biological consistency and requirement. In former ages it was a sin to do this and for such failings the deity threatened to liquidate the sinners. We may now have dropped—perhaps too carelessly—the moral accent. Yet to us, too, the issue is still one of survival by virtue of wholesomeness, or damnation and death through our own default.
In human design, we could conceivably see organic evolution continued, and extending into a man-shaped future. At any rate, that phenomenally intensive development in the multi-layered cortex of the human upper brain has not yet with certainty been proved a blind alley or a dismal failure. To be sure, this distinctly human brain harbors trouble, but it also may furnish some as yet untried survival aids. We have been laggards in calling upon all our potential powers and resources to arrange for us in a bearable manner an individual and communal living space. The toxic trash piles of our neglects and misdeeds, old and fresh, surround us in our physical environment. The confused wreckage of centuries, unrelated to any current practical purpose, is mixed in a most disturbing manner with our often feeble, often arbitrary, attempts at creating order.

Organically oriented design could, we hope, combat the chance character of the surrounding scene. Physiology must direct and check the technical advance in constructed environment. This setting of ours is all powerful; it comprises everything man-made to supply man, from the airy storage compartment of our toothbrush to the illumination of a speedway interchange, or of the neighborhood day-care center for toddlers.
A great deal of what has been vaguely called beauty will be involved in this proposed new and watchful scrutiny of man-made environment. It will come into question perhaps far more often than anybody could imagine in our current drab disorder. But the sort of beauty we speak of here will have given up its now too precarious grounds of self-defense. Designers will recognize that gradually but surely they must underbuild their proposals and compositions with more solid physiological foundations rather than with mere speculative conversation or sales talk. An eternal residuum of mystery may always lie deeply buried in this field, and yet the realm of research, testing, and provability increases from day to day.
All our expensive long-term investments in constructed environment will be considered legitimate only if the designs have a high, provable index of livability. Such designs must be conceived by a profession brought up in social responsibility, skilled, and intent on aiding the survival of a race that is in grave danger of becoming self-destructive.

Design is the cardinal means by which human beings have long tried to modify their natural environment, piecemeal and wholesale. The physical surroundings had to be made more habitable and more in keeping with rising aspirations. Each design becomes an ancestor to a great number of other designs and engenders a new crop of aspirations.
There were many failures in the past. Cities such as Rome have been called eternal only to become monuments, less of stability than of a continuing need for being remade. Rome and many of its buildings have been cruelly rehandled by inner and outer barbarians. The Eternal City bears striking testimony to the shipwreck of a multitude of plans and designs that have forever remained frustrated fragments. In the present, things may be different from what they were in the past, perhaps, but certainly not better. The controversial, calamitous character of contemporary towns, from ‘modern’ Mexico, Milan, Manila, back to Middletown, U. S. A., is known to all of us when we but cross the street from our office building to where we have parked the car.
Through the mental work of design, which is supposed to improve our lives, the race appears generally to stray farther and farther from the natural scene. The paradisical habitat of earliest man is considered a myth today and his natural situation may originally have posed him harsh enough problems. Yet those of our man-designed, man-constructed environment are often more trying and more severe tests to our natural resistance.
Man’s own cramped-together creations, anything from underground sewage systems and subways to a badly hemmed-in sky overhead, irritatingly criss-crossed by a maze of electric wires, should not prove as inescapable as fate. Lightning and the plague, once so formidable, have been countered by proper measures; must we then here find ourselves helpless? Must we remain victims, strangled and suffocated by our own design which has surrounded us with man-devouring metropolises, drab small towns manifesting a lack of order devastating to the soul, blighted countrysides along railroad tracks and highways, studded with petty ‘mere-utility’ structures, shaded by telephone poles and scented by gasoline fumes?

Design, the act of putting constructs in an order, or dis-order, seems to be human destiny. It seems to be the way into trouble and it may be the way out. It is the specific responsibility to which our species has matured, and constitutes the only chance of the thinking, foreseeing, and constructing animal, that we are, to preserve life on this shrunken planet and to survive with grace.
Such survival is undoubtedly our grand objective, according to an innate pattern of feeling. It is a matter of urgent concern to everyone—from the loftiest philosopher to the most matter-of-fact businessman. Design to contribute to survival of the race is more than design as a long-hair luxury or as a lubrication of bigger and better trade.
Never have the opportunities for general and integrated design on a world-wide scale been as breathtaking as they are today. The Second World War has left huge areas of destruction in its wake but promptly a clamor rose, from Le Havre, France, to Agana, Guam, that things should be rebuilt in the ‘old way.’
Yet pitiful attempts at resurrection of what is bygone are not the best we can do to honor the past. Also, naïve parochial outlook needs supplementation by global forethought, experience, and contemporary know-how. With all sincere respect for regionalism, there does exist now a cosmopolitan `joint responsibility’ for reconstruction anywhere. Human planning cannot really remain compartmental or sectional in an age of mutually braced security. Vast regions, which were formerly colonial, are awakening to their own contemporary participation with needs and supplies enormously stepped up. Technological progress in advanced centers is spreading and forcing a changed way of life even on the far-away, back-ward portion of the globe. And under the pressure of this progress if it is to be integrated, conscientious design is needed everywhere.
What sort of design? What are its governing principles and on what objective foundations can it be based? Is there anything to rely on behind all that bewildering multiform activity of ours? Is there anything which eloquent philosophers could put into words?
The writer has long felt tempted to put into words the fact that at this day and age no speculative philosophy, no deductive method alone, no talking-it-out can yield us all the principles of design. In our time new instruments and obligations have come to us from research penetrating into life’s performance. Physiology is a pursuit and a science which opens the door to broad and intensive application. We begin to wield tools which will enable us to do the patient spade-work which must be done. It will be fascinating because it is so novel.
With knowledge of the soil and subsoil of human nature and its potentials, we shall raise our heads over the turmoil of daily production and command views over an earth which we shall have to keep green with life if we mean to survive—not cramped full with all the doubtful doings of a too thoroughly commercialized technology. Tangible observation rather than abstract speculation will have to be the proper guide. And drifting will no longer do.